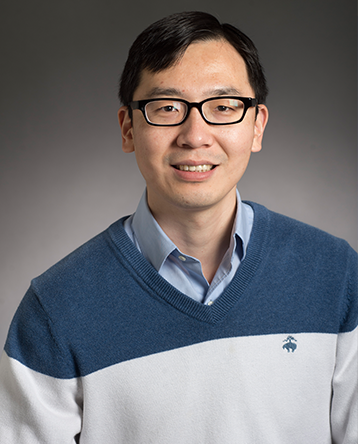 Sheng Shen is a professor in the Department of Mechanical Engineering at Carnegie Mellon University, with a background in nanoscale engineering, thermal science, photonics, and materials science. Shen’s research interests include nanoscale thermal transport and energy conversion phenomena, and their applications in solar or thermal energy conversion, thermal management, and multifunctional materials.

The energy transport properties of nanostructures can differ greatly from their bulk counterparts because the characteristic dimensions of nanostructures are often comparable with the wavelength or the mean free path of energy carriers such as photons, phonons, and electrons. At the nanoscale, the properties of materials can be engineered to increase the energy density or energy conversion efficiencies. In his recent research, Shen demonstrated nanoscale thermal radiation exceeding Planck’s law by three orders of magnitude and thermal conductivity of polymer nanofibers three hundred times higher than that of bulk polymers.

A new law for metamaterials

Sheng Shen and his student Jiayu Li have created a new scale law to describe the thermal emission from metasurfaces and metamaterials.

Eight research projects lead by CMU Engineering faculty have been awarded 2020 Seed Grants for Energy Research by the Scott Institue for Energy Innovation.

Creating an on-off switch for heat

This polymer thermal regulator can quickly transform from a conductor to an insulator, and back again. By switching between the two states, it can control its own temperature as well as the temperature of its surroundings, such as a refrigerator or computer.

A high-tech spin on spider silk

This game-changing technology can transform polymers from soft and thermally insulating materials to an ultra-strong and thermally conductive material.

The College of Engineering is proud to announce the recipients of the 2016 Dean’s Early Career Fellowships. These fellowships will provide the following young faculty members with additional funding for their outstanding research.